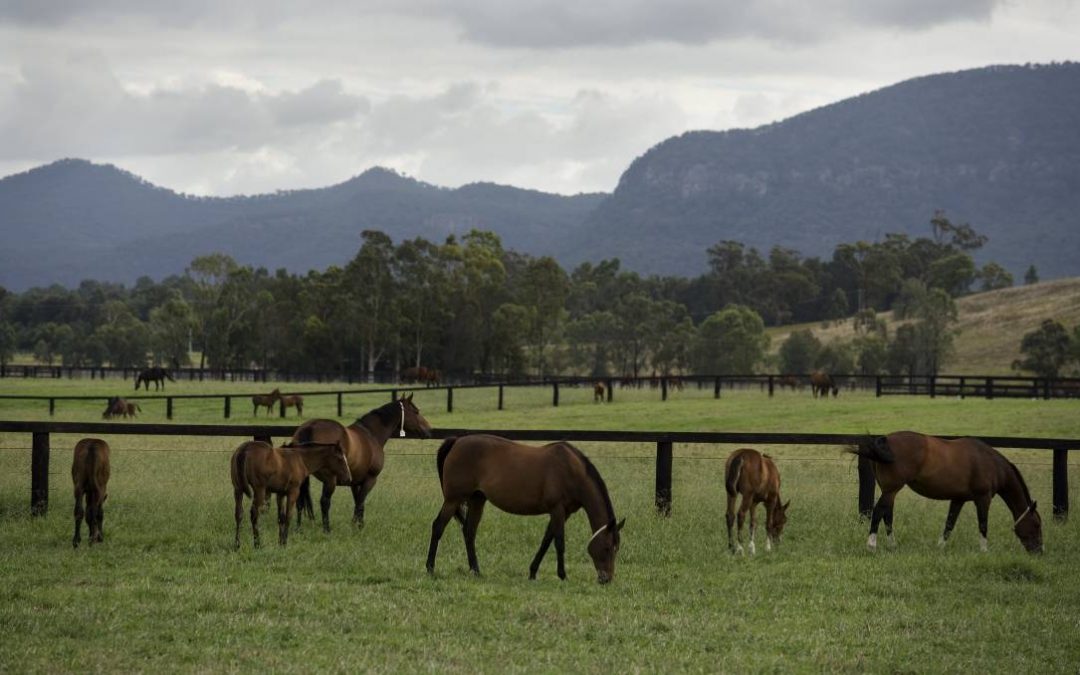 One stud manager warned there would be a critical feed situation if there was no decent rain before August, to help get fodder production back on track.

All studs emphasised to The Land, they knew they were better off than most farmers and deeply understood their plight to feed drought-affected stock, but said they had to make some tough decisions themselves.

Horse trainers have also told The Land they are finding it difficult to source good quality hay for horses, with prices at Mudgee hitting $17 for a small lucerne bale. They are also considering upping feed levies on owners.

Even the wealthy Darley operation was forced to disperse most of an elite  Charolais herd at  Kelvinside in the Hunter Valley due to the continuing dry.

Most have good access to groundwater and irrigation, but the feed side of operations will become critical by the end of the year.

Yarraman Stud has brought in a small drought levy already because of the high cost of feed, while Arrowfield, an industry leader in thoroughbred breeding, is in the throes of also considering a feed levy for horse owners.

Many studs luckily bought large stocks of hay earlier in the year, including Darley at Kelvinside, who bought 4000 bales out of southern Queensland – almost the last available. Producers cannot source hay out of Queensland, and very little is available out of NSW. Almost all hay is now being brought in from Victoria and South Australia. In South Australia lucerne hay supplies are running short.

Arrowfield farm manager Matt Hill said his stud was only in a good situation because it had bought a large load of hay earlier in the year.

“We are very mindful that we are in a luckier situation than many farmers who face very tough times. If there isn’t any rain before August we start to get into a troubling time, and it could be a dire situation for feed.” He said like any businesses, Arrowfield may have to cover increased costs of feed from owners at some stage.

Yarraman farm manager Scott Norton said they had already brought in a small drought levy for horse owners to cover feed costs.  “We were lucky to buy some large amounts of hay earlier in the year and we think that will get us through to Christmas. There is still some good quality lucerne hay in South Australia, but that is getting low. You can’t buy small bales of lucerne hay in the Hunter.”

Mr Norton said most trainers and studs had dedicated suppliers so they would get through. Owners were asked for a small drought levy to cover the increased costs of the dry. The worry was how much fodder could actually be produced next spring if there was no decent rain.

It’s hardly ever been drier and but feed has never been harder to get.– Horse trainer Cameron Crockett

Darley’s Kelvinside stud manager Barley Ward-Thomas said his stud was well-placed to survive the dry, but had been forced to move horses to better parts of the stud and also destock the stud’s prime herd of Charloais cattle, that had been at the stud for a long time and were a prized part of the operation.

Kelvinside would probably have used all of its river water allocation by the end of the year at considerable cost. “We are in a fortunate position but we know many aren’t,” he said. The stud bought 4000 bales out of Queensland three months ago. “It is a desperate situation for many as you would know,” he said.

Mudgee trainers Max and Cameron Crockett. Feed bills are going through the roof and hay is hard to find.

Mudgee trainer Cameron Crockett said his feed bill was going up exponentially, with both racehorses of his own stable and other stables spelling on the Crockett property, meaning he had to keep feed up to 70 horses with almost no pick in the paddock.

“Horses need to chew all day long, so we need to feed them morning, midday and night to keep the feed up,” he said.

“It’s hardly ever been drier and but feed has never been harder to get,” he said. “We had 15mm the other day but I don’t expect any growth out of that.” He would soon have to consider passing on the costs of feed at some stage to owners, with hay bales hitting $17 a bale for him at the moment, with the price expected to go much higher in coming months. You have to give horses something to chew on.”